The importance of gun ownership and self-defense go hand in hand. Choosing the best self defense ammo comes down to the power, speed, and capacity. A gun-owner’s hand can only handle so much force because the effectiveness of the bullet is determined by its speed. The 9mm, .40, and .45 each have strengths and weaknesses as self defense ammo. Let’s see how the different cartridges stack up against each other in each category. 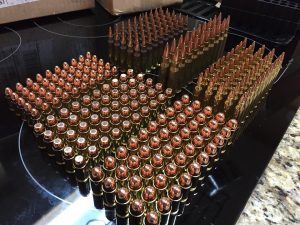 Handgun ammo power is measured by kinetic energy and momentum. The .45 has a clear advantage when it comes to power and momentum, over the 9mm and .40.

Velocity is a very important element in defensive handgun ammo. The three cartridges have minimal differences, but the 9mm has the advantage of penetration, the .45 has the advantage in expansion, and the .40 is the middle ground between the two.

Comparing capacity is the simplest of the three categories. Handguns will always carry more 9mm ammo cartridges than .40 and .45. The 9mm's additional benefits include its lighter weight compared to the .45 and .40, making them easier to carry and transport.

High velocity and large bullets don't coexist - unless you go back to the .44 Magnum. At the end of the day the shooting part is the most important factor. The conversation has shifted from ammo quality to gunman quality, and rightly so. The best shot is an accurate one.

LAX AMMO is Southern California’s premier loading center manufacturing both reloaded and factory new self defense ammo.We load over 1/2 million high-quality rounds in our facility each week. We pride ourselves in manufacturing the highest quality reloads anywhere and we offer the lowest prices around! Order today by visiting our site or follow us on Facebook, Instagram, and Twitter.
May 14, 2018 | View: 93 |   Categories: Tips & Tricks, Ammunition, Calibers, Cartridges

Can I Buy Ammunition Online in California? March 13, 2018

Ammo Storage Is Actually More Important Than You Think, Here's Why December 3, 2018